AutoCAD was still at the time the quite famous and most prevalent 2D Wireframe CAD system, with limited 3D Wireframe capabilities. So I decided to integrate SolidCAM CAM functionality in AutoCAD. We signed up as Autodesk ADN partner and started the integration. When the integration was finished, we decided to launch it at a major Autodesk event for resellers. This was at the One Team Autodesk conference in Nice in 1999. We had a stand there at the Partners’ exhibit area. We were there for 3 days and we barely got one or two AutoCAD Resellers to get interested in our integrated CAM solution in AutoCAD. Also at one of the major conference sessions, we saw that Autodesk management was promoting another CAM system,  that is not even integrated in AutoCAD. From this event, I got the realization that AutoCAD resellers did not have the interest to handle a CAM solution. We had started already the integration of SolidCAM into the new Autodesk Inventor solid 3D CAD system. However the Inventor APIs were not yet stable enough to enable us to do a good working integration. So we decided to put the Autodesk Inventor integration on hold.

Our next logical candidate for integration was SolidWorks. Since its launch in 1995, SolidWorks has become very famous, as the choice 3D easy-to-use solid CAD system. We signed up as Solution Partner for SolidWorks and we started the integration. It went fast and we launched the integration in SolidWorks at the SolidWorks Worldwide Reseller Conference in Jan 2002 at the Mandalay Bay hotel  in Las Vegas.

We had a SolidCAM booth, very close to the entrance, at the SolidWorks exhibition Partner area. In all 3 days of the exhibition our booth was crowded with SolidWorks resellers looking for an integrated CAM solution. It turned out that the only other available integrated CAM solution for SolidWorks, CAMWorks, was not really working for them! CAMWorks provided an automated CAM solution that demonstrated nicely but was nearly useless for the customers who were impressed by its automation and bought it! Many SolidWorks resellers had taken up CAMWorks on the premise of its nice automation and now they were getting the wrath of the unhappy customers that bought CAMWorks from them! They were all desperately looking for a good alternative! And SolidCAM provided that working alternative: it was seamlessly integrated in SolidWorks and provided interactive CAM tools that the customers needed and loved.

In short, after those 3 days I had the contacts of about 30 SolidWorks resellers worldwide, who either were looking for a CAMWorks replacement or who were not selling CAM yet, and were looking for a good integrated CAM solution. Practically we were able after the exhibition to sign up nearly all those resellers to sell SolidCAM. We also sold right at the exhibition our first SolidCAM integration in SolidWorks to Matt Shedlov from Boston Scientific, who was using SolidWorks as their CAD system. Matt sat in our booth for a demonstration of SolidCAM in SolidWorks, liked what he saw, came back again the next day for another demo and decided to buy right there and then! Boston Scientific became our first customer worldwide for SolidCAM in SolidWorks.

That exhibition was a huge breakthrough for SolidCAM through its SolidWorks integration. Also I came to the realization that SolidWorks resellers wanted to sell a CAM solution, in order to provide a complete integrated CAD/CAM solution to their customers. Our integration with SolidWorks would become one of the most important strategic successes for SolidCAM.

An interesting anecdote after the exhibition was that I was asked if I had gambled in Las Vegas. I answered yes: I have gambled $25,000 and I expect to make millions! Some people thought I was talking about gambling at the Roulette or Black Jack tables – actually I was referring to the costs of the exhibition booth and team!

We had one more hurdle to pass regarding our SolidWorks integration. There was a certification process in SolidWorks that should enable us to get the Gold-Certified status from SolidWorks. It was not an easy process and it took us nearly one more year until we got the coveted Gold-Certified Status, just as we joined our second SolidWorks Worldwide exhibition in Orlando in Jan 2003. In that exhibition another important event happened: we met the SolidWorks reseller AET, where Chris Calderone worked. Both Chris and his brother Anthony will play an important role in our eventual development and launch of our revolutionary iMachining technology.

So now we had in our hands successful integrations with the 2 major solid mainstream CAD systems in the world – SolidWorks and Autodesk inventor – and we had become the worldwide Leaders in Integrated CAM. 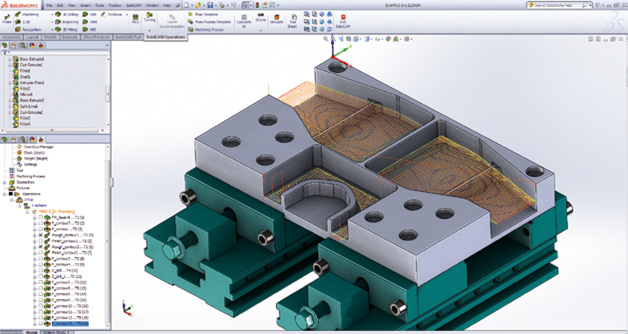