One day in 2006 my daughter Natalie, at that time doing her BA at Bar-Ilan University, decided to look for a part-time job as a waitress. She went with a friend to the Diamond Bourse area in Ramat-Gan and was strolling at the main street, where there are many restaurants, mainly for the people working in that area. A sign at the window of one of these restaurants, stating they are looking for waitresses, caught her eyes and she went in.

During her interview with the restaurant owner, he asked her about her name. She answered: Natalie Somekh. He asked her: are you the daughter of Emil Somekh? She answered: yes. The owner told her that his name is Mickey Berman and that he wanted her to tell me to come visit his restaurant to taste his special Hummus dish. Natalie got the part-time waitress job.

When she met me after that, she told me about her encounter with this restaurant owner, who seemed to know me and who has invited me to taste his special dish. Obviously I knew who Mickey Berman was – when I was still working in Israel Aircraft Industries, nearly 25 years earlier, he had established a company to develop an automatic CAM system for solid models, a very daring endeavor at that time. The venture did not work out at that time and he became an employee of one of the big CNC machine tool distributors in Israel and continued there pioneering work in CNC machining. I had 2 short meetings with him in 1992 and 1995, where we discussed the possibility of him working for us.

So a few days after that, I decided to go visit his restaurant and see what he wanted to tell me. As I was leaving the company around lunchtime to go to his restaurant, I met by chance our chief programmer, Doron Osovlanski, and I asked him to join me to eat Hummus at Mickey’s restaurant. Doron has been working with me in SolidCAM nearly from the start. He was one of my students when I was teaching part-time at the mathematics and computer science department in Bar-Ilan University. Doron had developed and programmed during the years many of our complicated SolidCAM machining algorithms.

I drove with Doron to the restaurant and we met Mickey. We sat down and we were served 2 delicious Hummus plates. Hummus is prepared from chickpeas in a special cooking way and is famous as a middle-eastern dish. As we were enjoying our delicious Hummus plate, Mickey joined us at the table and was telling us about all the CNC machining inventions he had done and patented over the years and also his algorithm developments. It was impressive. So I said to him: look Mickey, somebody with your intellectual and machining prowess, should be putting them to good use and not just cooking and serving Hummus.

It just happened that a month before this restaurant meeting, we had a visit by Kazuhiro Usui, from our Reseller Tactx in Japan. Kazuhiro was always asking us to add new functionalities to the SolidCAM software. At the end of this visit, he drew on the board a spiral toolpath and he said that some customers in Japan are looking for such technology. So as I was talking to Mickey, I took a napkin and drew on it a spiral toolpath. I then told Mickey that if can succeed to make such a toolapth, together with our chief programmer Doron, this would be his entrance exam to SolidCAM.

Mickey took the challenge and, after finalizing the terms of his pay for this part-time work, he started working with Doron. They usually met at Doron’s home in the evening, few times a week, to develop the spiral toolpath. This was the start of the iMachining project, practically launched on a napkin in a Hummus restaurant.

Then came an interesting hurdle – Mickey was a chain-smoker and Doron hated smoking. Doron told me that after every meeting with Mickey he had to change all his clothes and put them in the wash because they reeked with the smell from Mickey’s smoke! However they persevered – Mickey knew what type of toolpath he wanted and Doron was the amazing programmer who could write the code that generates the iMachining toolpath. My original spiral toolpath request has developed into a much more advanced morphed spiral toolpath with channel separation. It took about 3 years for Mickey and Doron, assisted by additional staff, to make the first working prototype of the iMachining toolpath.

An additional important person, involved in the iMachining development, was Anthony Calderone, our CTO in SolidCAM Inc. When time came to choose a Beta-site, Anthony suggested the machine shop where his older brother Chris Calderone worked in Pennsylvania, near our US office. The Calderone brothers had learned machining from their father, who had a machine shop with manual machines; when he bought his first CNC machine he asked his young sons Chris and Anthony to program it – they were 15 and 12 year old at that time. So this is how the Calderone brothers had developed their CNC machining expertise from such early age.

When Chris started doing the testing of the iMachining toolpath, he was excited by its results. But he had to guess the best spindle speeds and feeds to use for the toolpath. He did not like the trial and error process of that, and decided to develop a Wizard that works together with the toolpath, to automatically calculate the cutting conditions, based on the tool and stock material and the CNC machine specs. This is how the iMachining Wizard was born. 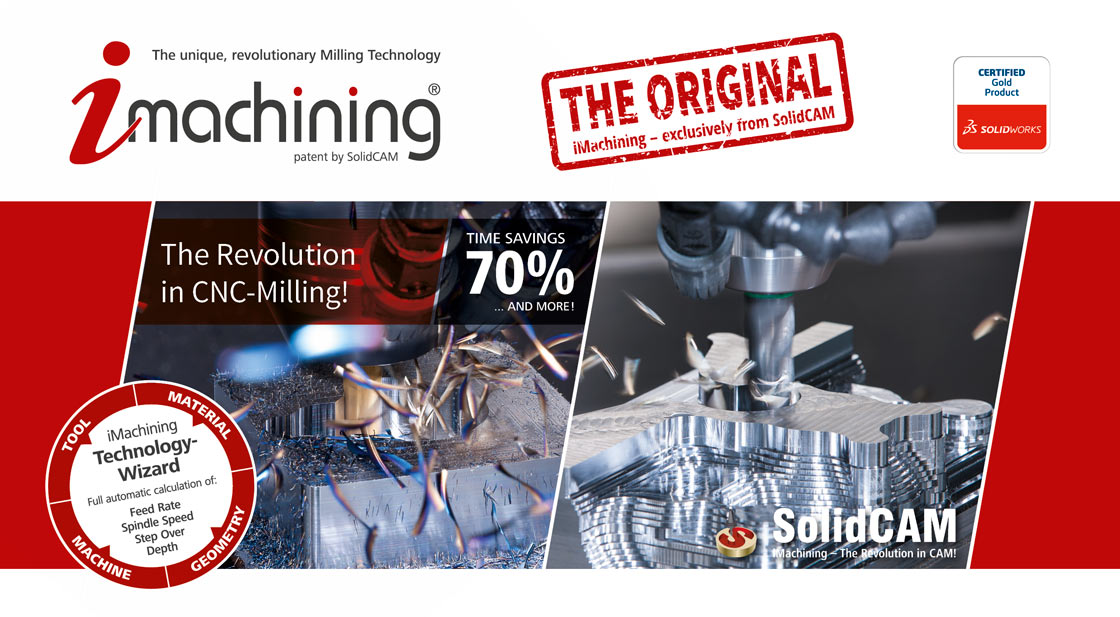 iMachining put SolidCAM technologically way ahead of all its competitors. The decision to develop iMachining, taken at a Hummus restaurant, has changed dramatically both the SolidCAM company and the CNC machining world! It is SolidCAM’s duty to make sure that every machinist in the world knows about iMachining and can have the opportunity to buy it and profitably use it.